Blood: It sustains life, it carries iron, it carries oxygen to our brain and tissues of the body, it keeps us healthy and fights off microbes, it clots our blood when we cut or injure ourselves.  Blood is crucial to life.  We will be discussing what makes blood unique and all the components of normal, healthy blood, as well as abnormalities and how they affect the rest of the body.  First, you need to understand the components of blood and what makes up its composition.

Blood consists of red blood cells suspended in a liquid medium called plasma.  Plasma contains clotting factors that aid in the coagulation (clotting) of blood.  It also contains white blood cells.  It accounts for about 7% of the body weight.  Each adult has about 5 liters of blood.

The major (solid) components of blood are: 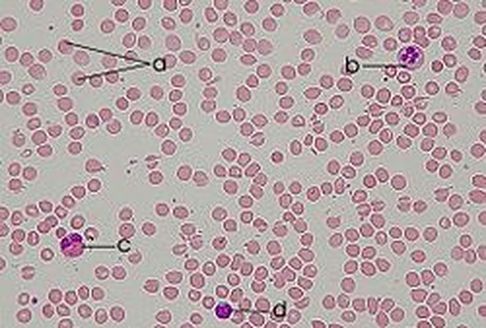 When you go to the doctor and they collect your blood, sometimes they spin down your blood to separate it into 3 different parts or layers that they can test for various things.  This is performed by centrifuging your blood (spinning it down) at a high rate of speed (rounds per minute or rpms) in a centrifuge.

Centrifuged blood divides into three distinct layers:            -The plasma is the extracellular matrix of the blood cells
-It is mostly water (up to 95%)
-It contains dissolved components, including proteins (albumin, fibrinogen, globulin), sodium, glucose, clotting          factors, electrolytes, hormones, carbon dioxide
-Because it is intravascular fluid, it helps to maintain osmotic pressure that keeps everything in balance
-This is prepared by spinning or centrifuging the blood in an anticoagulant-coated tube (EDTA, which is the lavender/purple-top tube). This keeps the blood from clotting. 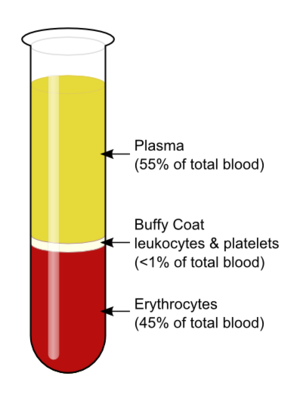 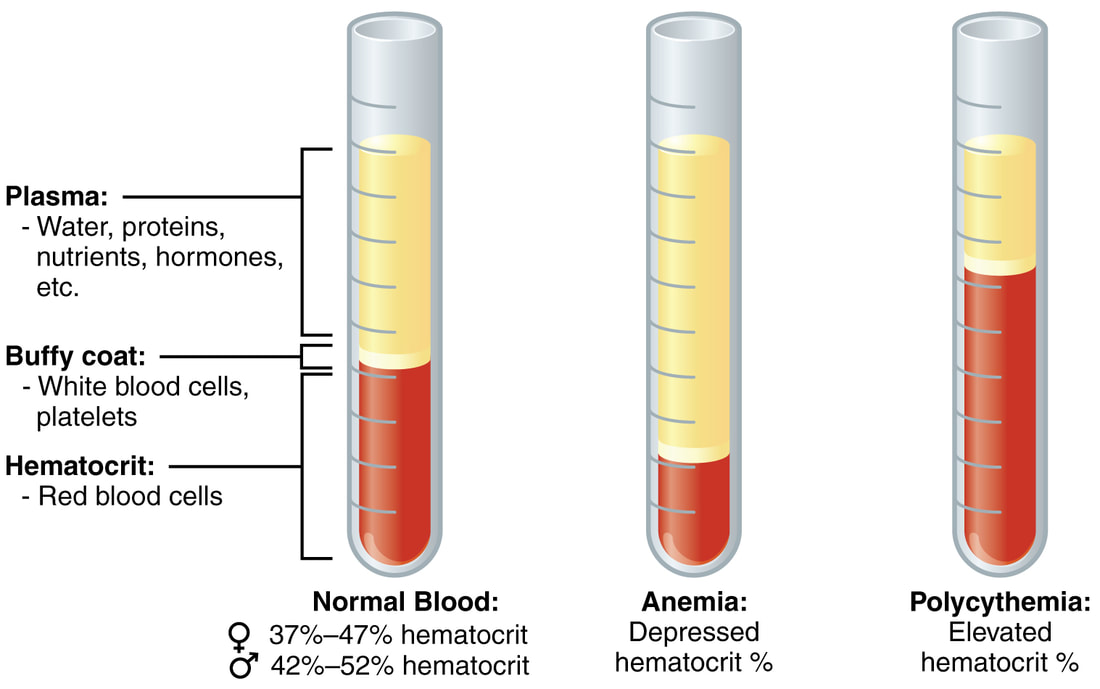 Coagulated blood is clotted blood that yields serum without fibrinogen, but some of the clotting factors remain.

After centrifugation of blood into its components by a SST (serum separator tube), the serum may appear something other than clear.  It is helpful to be able to recognize these differences because sometimes they can interfere with Chemistry tests.

As seen in the images below, icterus or hyperbilirubenemia (increased bilirubin levels) ranges from 1+ to 4+.  Normal, straw-colored serum can be seen on the far left (0).  As levels of bilirubin are present or increase, the color of the serum ranges from light gold to amber to dark gold to brownish.  This can indicate jaundice or a liver problem, which may range from a virus to alcoholism to cirrhosis to a fluke to a gallstone or hemolytic anemia.  The following are tests that may be affected by an icteric sample: 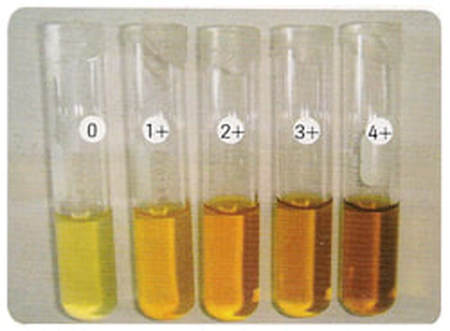 In all specimens, the normal serum is shown on the left, followed by the abnormal serum specimens; 1) Jaundice/Icterus, 2) Lipemia, 3) Hemolysis; http://clinical-laboratory.blogspot.com/2013/06/preventing-pre-analytical-errors.html
Hemolytic Specimens:
Hemolysis is a very common finding in laboratory specimens and is a frequent cause of specimen inadequacy and rejection.  Hemolysis is when red blood cells rupture, releasing the hemoglobin pigment, causing the serum to appear pink to orange to red-orange to cherry red.  Hemolysis may be intravascular (occur within the patient's veins) or extravascular (outside the veins, in between the cells, or in the specimen itself during centrifugation or mishandling of a specimen or during the phlebotomy blood collection process).
Hemolysis interferes with the spectrophotometric properties of many laboratory instruments and can cause results to be inaccurate.  It can actually dilute the serum or plasma.  The following tests may be affected by moderate to severe hemolysis:

Decreased Values:
Increased Values:
Lipemic Specimens (Lipemia):
In an individual with increased fats, cholesterol or triglycerides in the bloodstream, the serum or plasma components may appear lipemic, thick and cloudy or milky and turbid due to the presence of these excess fats. Tests that are especially affected include the electrolytes sodium (Na+) and potassium (K+).  Hemolysis often occurs along with lipemia because lipemia greatly enhances rupture of red blood cells.  The following tests are affected: